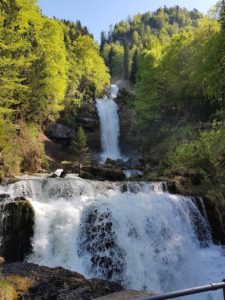 The Giessbach Falls are a popular excursion destination, especially in the summer months. The Giessbach rises in the high valleys and basins of the Faulhorn-Sägistal area and plunges over 14 steps into Lake Brienz near the Schifflände Giessbach ship station.

At the foot of this natural spectacle is the historic Grandhotel Giessbach, which looks like a fairytale castle. The hotel was built in 1873/74 by the famous French architect Horace Edouard Davine on behalf of the Hauser hotel family from Zurich. Until the outbreak of the war in 1914, the house was a meeting place for great personalities from all over the world. Diplomats, statesmen and artists spent the summer months in the Giessbach to recharge their batteries and exchanged social gossip and state secrets. The First and Second World Wars had fatal consequences for the Swiss hotel industry. After years of decline, the hotel temporarily closed its doors in 1979.

In 1983, with the help of his association Helvetia Nostra and the “Giessbach Foundation for the Swiss People”, the Swiss environmentalist Franz Weber bought the house and the 22 hectares of land belonging to it and placed it under a protection order. In 1984 the hotel reopened with a new restaurant and was renovated floor by floor during the winter months.

Today the hotel offers 70 rooms and suites with thirteen different categories. The rooms are lovingly decorated and partly furnished with original restored furniture from the turn of the century. Each room has its own individual charm. The hotel is open from mid-April to mid-October. During the winter months the house can be booked exclusively for private occasions.

Another highlight is the Giessbachbahn, which is still the oldest funicular railway in Switzerland. The railway was built in 1879 by Maschinenfabrik Aarau and was the first in the world at that time with a diversion in the middle of the line. 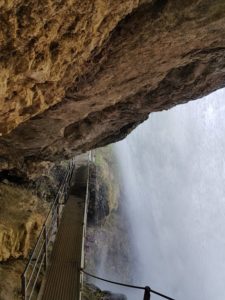 The Giessbach Falls can be reached by boat from Interlaken or Brienz. From Schiffländte station, the funicular leads up to the Grandhotel Giessbach, from where the waterfall can be reached on foot in approx. 5 minutes. If you are travelling by car, there is a public car park above the Grandhotel. From there the path leads through the forest directly to the waterfall. For those who would like to explore the waterfall in more detail, there is the opportunity to experience the natural spectacle on a footpath behind the waterfall. It is very impressive to see the huge mass of water from a slightly different perspective. For those who want to combine the excursion with a hike, there are various hiking routes available for all levels around the waterfall.

Don’t miss the opportunity to enjoy an ice cream or coffee with a magnificent view of the waterfall and Lake Brienz in the hotel’s restaurant on the terrace.

More information about this beautiful place can be found here.